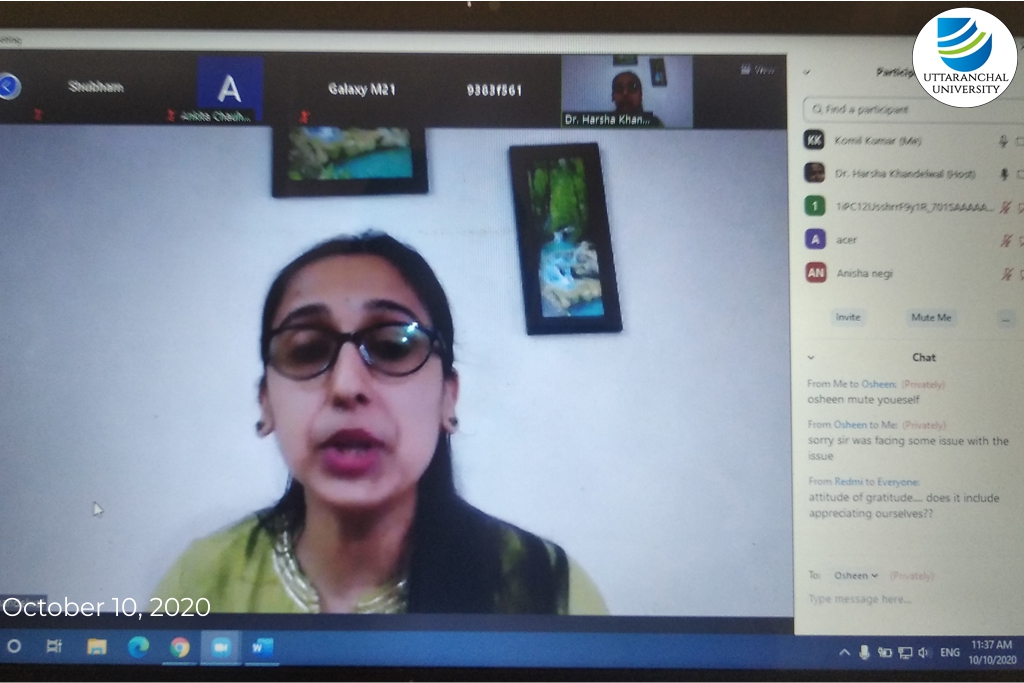 “It is not realistic to be happy all the time, no matter what all the motivational quotes on the internet say.” -Dina Rodriguez

The addressal of the issue of mental health has probably become one of most discussed and studied issue over the past few years. With the constant inner battles that a person faces, it is undeniable to provide such a space that gives exposure to the people to discuss and speak their hearts out. It becomes crucial to make such people strengthen themselves and make them realize that they possess the epitome of strength. On the account of the World Mental Health Awareness Day, the School of Liberal Arts endeavoured to organize an event that aimed to provide a platform for the teachers and the students to discuss their concern about mental health. The chief speaker of the event was Dr. Harsha Khandelwal (Psychologist and Emotional Intelligence Coach and the Founder of Corporate Parijat). The chief dignitaries of the event included the Vice Chancellor of Uttaranchal University, Dr. Devendra Pathak and the faculty of the School of Liberal Arts.

The entire programme was hosted gracefully by Ayesha Thapa (B.A. Honours, Psychology) who gave insight to the various presentations of the day. Surabhi Gaur (B.A. Honours, Psychology) gave an applaudable speech on Mental Health and its importance. The programme was attended by the students of SLA and other colleges as well. It commenced with a welcomes Speech by organizer Mr.Komil Kumar and further by the Vice Chancellor of the University, Dr. Devendra Pathak who heartily welcomed the virtual guest of the event. The students felt highly overwhelmed to hear the words of wisdom and they got an insight of the mental health and how it has a deep effect in the life of a person. The speech encapsulated plethora of intricacies of the human mind and its way of moulding the personality of an individual. It also portrayed that how discussions for the mental health are pronounced, especially for the current generation that experiences numerous issues about the same.

The programme further proceeded with the presentation of the main guest of the session, Dr. Harsha Khandelwal. She assisted the students in exploring and analysing the human mind and the concept of mental health. The slides’ presentation rendered aid to realize that there is no rationale to “stigmatize” mental health in the society. The attendees realized that one must be expressive about such topics that help in the interpretation of the human psychology. Her factual elucidation also included the gravity of the topics like the importance of meditation in battling with such grave emotions, the attitude of gratitude, and providing assistance to people undergoing mental pressures. It further included some solutions for the recuperation from such hard times. She also addressed many of the queries of the students regarding the mental health.The students were contented and motivated with the answers. Generation gap was also addressed as a significant hindrance that makes it strenuous to comprehend the mindset of the people of the different generations.

The event came to a graceful conclusion with a Vote of Thanks presented by Mrs. Reeta Rautela (Assistant Professor and In-charge- SLA). The valuable contribution and presence of everyone involved in the entire programme was eulogized. The event was successful enough in evoking a sense of concern towards the issue of mental health among all the attendees. Everyone sat glued to the show throughout, and relished every bit of it. The interaction between the teachers and the students was very fruitful and pragmatic. All the students and the teachers looked forward to organize many such optimistic events in the coming future as well.