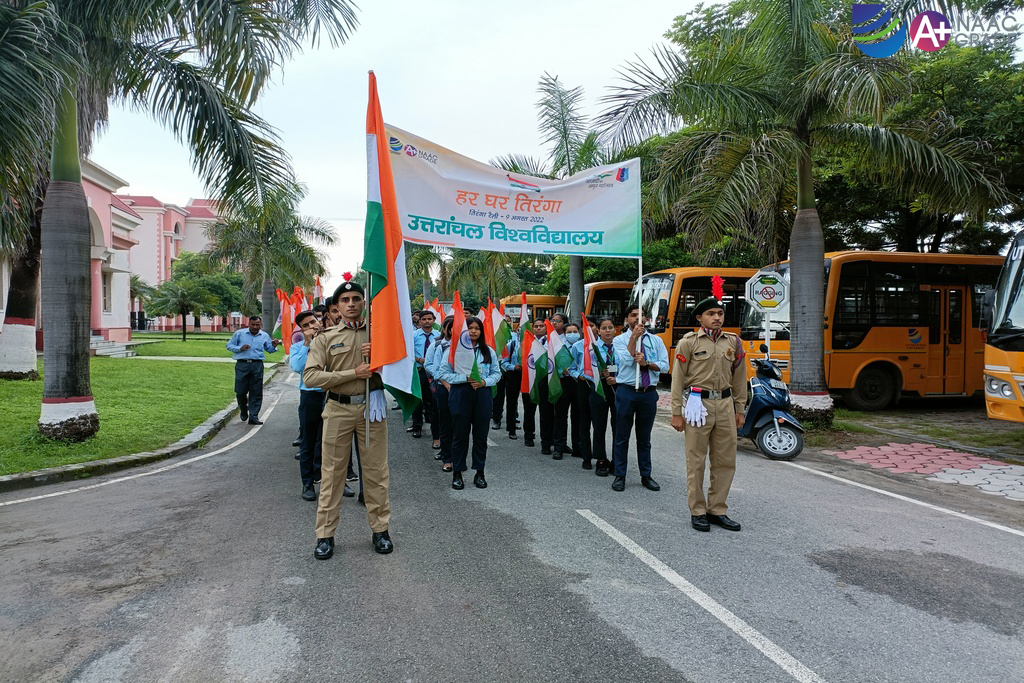 ‘Har Ghar Tiranga’ is a campaign organized under the Azadi Ka Amrit Mahotsav to encourage people to bring the Tiranga home and hoist it to commemorate the 75th anniversary of India’s independence. We’ve always had a more formal and institutional relationship with the flag than a personal one. Bringing the flag home as a nation in the 75th year of independence becomes symbolic of not only a personal connection to the Tiranga but also of our dedication to nation-building. The initiative’s goal is to instill patriotism in the hearts of the individuals and to raise awareness about the Indian National Flag. 50 students from the university were gathered in the university campus at 6:00 A.M. and the Tiranga Rally was flagged off by Prof (Dr) Shravan Kumar, Dean Student Welfare by flying off the flag. All the students and the coordinators then rallied to IT Park Chowk in the Raipur Constituency area. The students from various schools and colleges joined the Tiranga Rally and it proved to be a huge success. India is undoubtedly emerging as a strong and glorious nation under Prime Minister Narendra Modi’s leadership. “On the occasion of ‘Azadi ka Amrit Mahotsav’, the entire country remembers those who gave their lives for the country’s independence”, Chief Minister of Uttarakhand, Shri Pushkar Singh Dhami said during the rally. The next 25 years will be the “golden years” of India’s “glorious resurgence,” he claims. He also stated that everyone should work together to make Uttarakhand a leading state by 2025, the year when it will celebrate its silver jubilee. After the stimulating speech, the rally marched towards the Clock Tower in the presence of Pushkar Singh Dhami. Azadi ka Amrit Mahotsav indeed evolved into a people’s movement and we were fortunate to be a part of it.