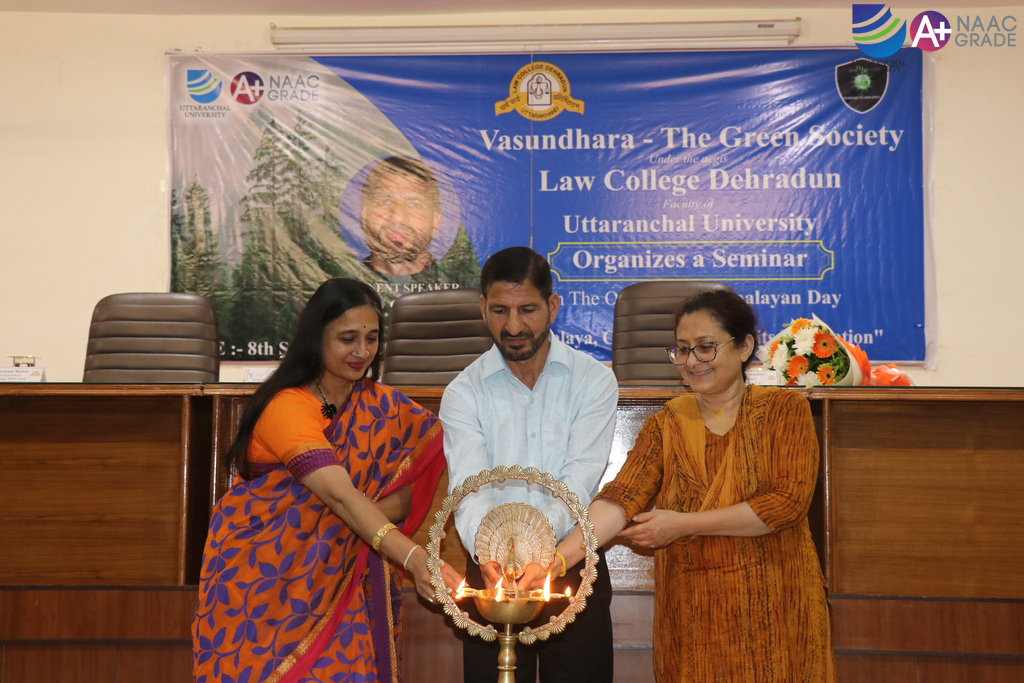 Law College Dehradun, Faculty of Uttaranchal University, conducted a seminar on the eve of Himalayan Day, 8 September 2022 under the aegis of Vasundhara – The Green Society. There were a total of 200 participants who registered themselves for the event. The seminar intended to provide a great understanding on ‘Himalaya, Climate Change and its Implications’ by our eminent speaker Dr P S Negi, Senior Scientist (ex.), Environment Division Wadia Institute of Himalayan Geology (WIHG), Govt. of India, Dehradun.

Embracing the culture, and the traditions that mark the start of an event in our university, opening remarks were delivered by Mr Sagar Tiwari, the Executive member of Vasundhara- The Green Society. The Guest of honour for the day was felicitated by the Hon’ble Head of Department Dr Poonam Rawat which was followed by the lighting up of the lamp by the honourable dignitaries, followed by the University Kulgeet. Further, Dr Poonam Rawat, Head of Department, Law College Dehradun commenced the oath-taking ceremony of Himalayan Day. The luminaries were provided a hearty welcome by the moderators of the event while the Chairperson Dr Lakshmi Priya Vinjamuri shared a few glimpses of the remarkable and successful events organised by the society.

The eminent speaker commenced his view, introducing everyone to Himalaya- An Introduction to Climate Change where he stated that the Himalayas were formed by collision nearly 50 million years ago and serves as a home to 70 million inhabitants. He also mentioned about the various environmental issues, pollution being one of them, such as black carbon which is very harmful for human beings causing them several health problems. He also shared some pictorial images captured by satellite regarding the study area of Chirvasa and Bhojvasa, Gangotri Glacier Valley. With all the material facts, Dr P S Negi explained to us the actual cause of the Kedarnath Disaster which took place in the year 2013 in Uttarakhand stating that, the formation of the low-pressure area in north-western India was the major reason for heavy rainfall and cleared the misconception that the disaster occurred due to cloud burst. At the end of the session, a live Q&A round was conducted, and the participants actively participated and bestowed their queries before the speaker.

Dr Lakshmi Priya Vinjamuri presented a memento to the chief guest of the day and thanked him for taking out time from his busy schedule and being a part of the seminar. Mr Rithik Aggarwal proposed the Vote of Thanks.

The Seminar provided a great and deeper understanding of the topic of Biodiversity Conservation and helped the participants to understand the concept in a detailed manner and the event turned out to be a great learning experience for everyone.