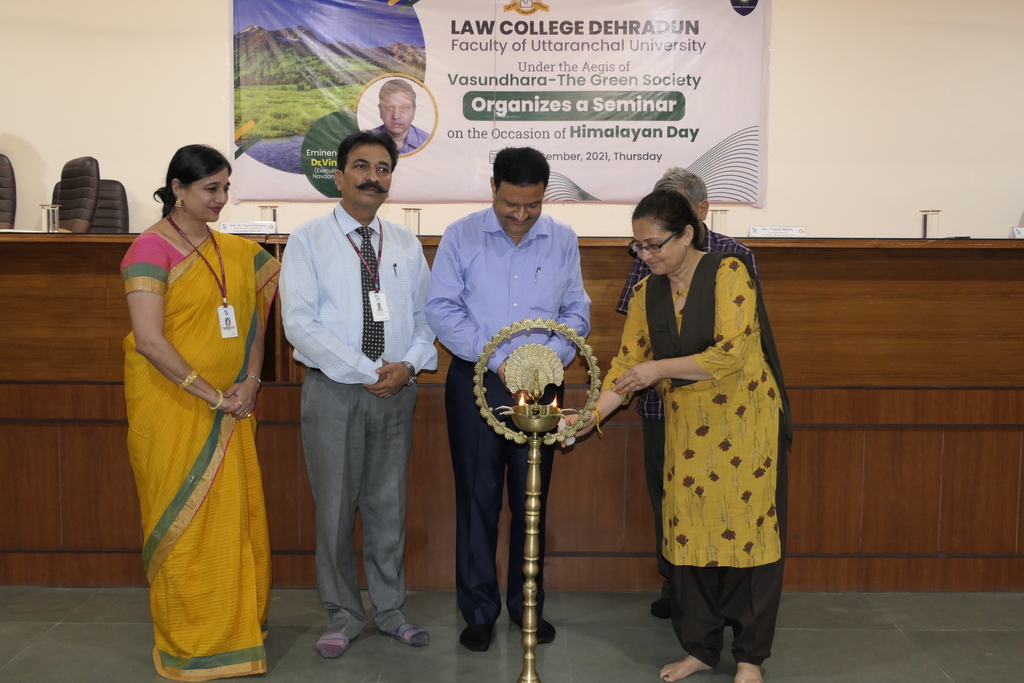 Law College Dehradun organised a seminar on the topic ‘Biodiversity Conservation and its related policies: North Western Himalayan Perspective’. This marked the celebration of Himalayan day in the state of Uttarakhand on 9th of September by Vasundhara- The Green Society to mark the significance of Himalayas. Dr. Vinod Bhatt, the eminent speaker, is the Executive Director of Navdanya Trust, is a research scientist and has started working on Biodiversity Conservation and Promotion of Organic farming. At present he is heading Uttara Resource Development Society, a Non-Governmental Organisation situated in Dehradun. He is involved in reviewing and evaluation of development projects and programs related to livelihoods by various NGO’s and have contributed to over more than 30 research papers in various National and International journals and have also edited a number of books.

The event commenced embracing the culture and the traditions of the university, as the opening remarks were delivered by Ms. Shweta Sharma, Executive member of Vasundhara- The Green Society, who further briefed the objectives of Himalayan day. The Guest of honour for the day was felicitated by the Hon’ble Chancellor of the University, Shri. Jitender Joshi and the opening of the event was marked up on a religious note after the lighting up of the lamp by the honourable dignitaries, followed by the University Kulgeet. The luminaries were provided with a hearty welcome by Ms. Anushree Baregama, executive member of the Vasundhara- The Green Society. Further the President of the society, Ms. Ishita Baghel, introduced everyone and shared some of the remarkable and successful events organised by the society in such a short span of time.

Prof. (Dr.) Rajesh Bahuguna, Officiating Vice Chancellor, Uttaranchal University, introduced the renowned speaker and then elaborated on the importance of Himalayas to various segments of the society, be it farmers, saints, brahmans, institutions, who realise the significance of Himalayas as a great source of rivers in the country. Without taking much of the time, he wished luck to the entire Vasundhara- The Green Society, for organising such an educational seminar and the session was further handed over to the eminent speaker for the start of his enriching session.

Dr. Vinod Bhatt, commenced his view, remembering the Padma Vibhushan awarded Shri Sunder Lal Bahuguna who first started the celebration of Himalayan day in the year 2010 and other environmentalists Padma Bhushan Dr Anil Joshi and Radha Behan. He said that Himalayan day is celebrated with the motive to spread the message that “solutions for sustainable development and ecological stability for the Himalaya must be as unique as the Himalayan ecosystem itself”. He enunciated that the Himalaya is one of the biodiversity hotspot and richest regions of the world in terms of bio cultural diversity. India is Known for Rich heritage of biological diversity, having already documented over 89,000 species of animals and 46,000 species of plants. Biodiversity is a common property resource and is also considered as a foundation for achieving sustainability and food security. He informed that the Himalaya is extremely susceptible to natural hazards. Extreme events like glacial Lake outburst flood (GLOF) , flash floods from melting snows pose threat  to downstream communities. Because of the climate change the glaciers in the Himalaya are melting and receding at an alarming rate. The prominent speaker also mentioned about few disasters of the last 10 years. He further mentioned that the Uttarakhand disaster which took place on 13th of June and continued till 17th of June in the year 2013 and killed more than 20,000 people was unforgettable, some of the Scientists relate it to the climate change whereas some considered it as a rare incident due to heavy and unprecedented precipitation.

He informed the audience that according to his research the only safeguard against climate change is biodiversity. It is a natural capital and ecological insurance in response to climate change; diversity offers a cushion against both climate extremes and climate uncertainties. He further clarified that the Himalayan mountains are home to unique farming systems protecting unique inter and intra species diversity in forests, crops and livestock resources. He also talked about agro biodiversity which according to him is eroding due to the changing food habits with the changing times and the economies of any region. He further enlightened the audience about diversity to Monoculture cash crops. When Mountain farmer’s switch to high yielding crash crops, diversity of traditional food crops is replaced with one or two varieties. These crops are also disappearing because of standardization of agricultural practices, monocropping trends, use of synthetic agrochemicals and changes in food habits skewed towards a few commodity crops like wheat, rice, soyabean and maize dominating food systems. He also mentioned about the Baranaja system which is disappearing. He hadn’t forgotten to mention about the law of the land i.e  Constitution of India, where it mandates conservation as a duty of the citizen and a responsibility of the state. Environment protection and biodiversity conservation is enshrined in the constitution of India. Article 48-A and Article 51-A(g) of the Directive Principles of State Policy talks about the duty of the State to protect and preserve the environment, including forests, rivers and lakes.

He also enumerated on the various legislations and agreements on environment protection in India such as, Indian Forest Act, 1927, Biological Diversity Act, 2002, The Wildlife Protection Act, 1972 which play a major role in the protection and preservation of environment. He further mentioned that the Uttarakhand Biodiversity Board has started a very good initiative by facilitating agreement between BMCs and companies who are involved in trade of medicinal plants for the benefit of both farmers and the companies. The notable speaker concluded the speech by saying that India is a home for the bounty of biocultural heritage, which is a complex system of symbiotic relationship between the indigenous people and their natural environment. At last, he thanked everyone for being a part of this seminar and congratulated the entire team of Vasundhara- The Green Society for the successful completion of the event.

The session was concluded by worthy remarks of the eminent Chairperson of the society, Dr. Lakshmi Priya Vinjamuri, who thanked the guest Dr. Vinot Bhatt, for taking out time from his busy schedule and being a part of the seminar. She thanked the speaker who had put forward his thoughts on the topic in such an interesting manner through a combination of both audio and visual aids for the better understanding of the attendees. The event was brought to an end, by the moderators of the event after delivering the formal Vote of Thanks.

The Seminar provided a great and deeper understanding of the topic Biodiversity Conservation and helped the participants to understand the concept in a detailed manner, and turned out to be a great learning experience for everyone.