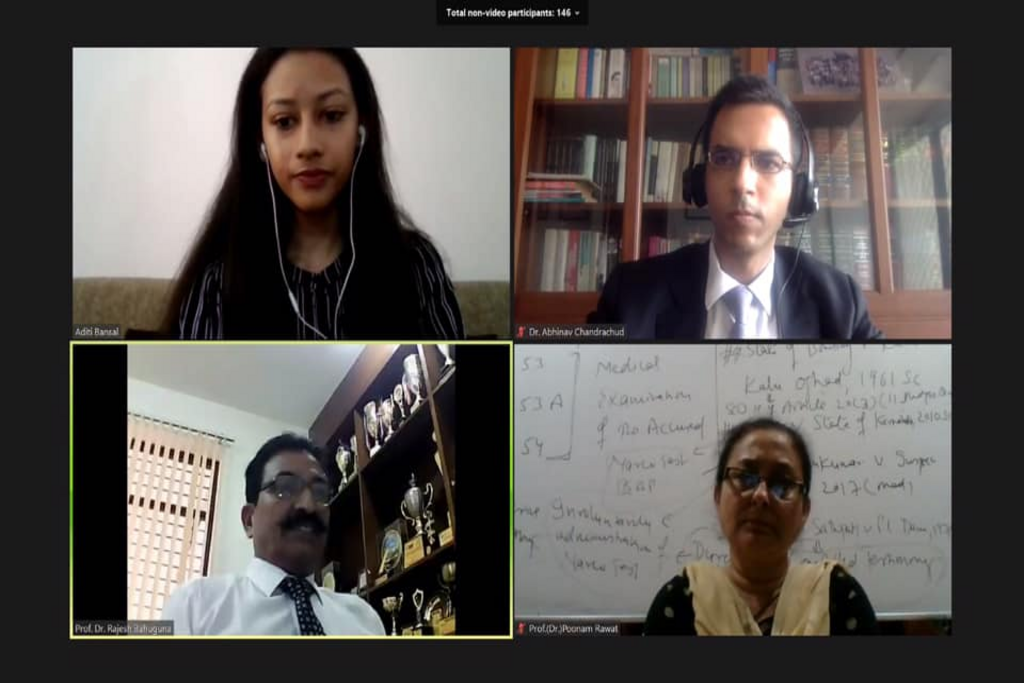 Law College Dehradun organized a national lecture on the topic “Affirmative Action in India and the U S” on 3rd October 2020. The keynote speaker of the day was Dr Abhinav Chandrachud, advocate, Bombay HC, author and constitutional. The event commenced with a warm welcome by Ms Aditi Bansalto the keynote speaker of the day, Dean Law College Dehradun, Prof (Dr) Rajesh Bahuguna, Patron, Moot Court Society, and Prof (Dr) Poonam Rawat, HoD Law, Chairperson, Moot Court Society, along with all the attendees of the event. Prof (Dr) Rajesh Bahuguna welcomed the speaker and also stated his views on the topic.

Dr Abhinav Chandrachud deliberated on the basic comparison between the judicial proceedings and prescribed judicial procedures in India and the U S.  He then proceeded by giving a gist of the background of Affirmative Action in India and the U S In India, the Constituent Assembly is comprised of elected representatives, and the Constituent Assembly Debate is recorded to be made public. On the other hand, in the U S the Constituent Committee drafted the Constitution of the U S A very secretly in Philadelphia. Further, he discussed how in India the cases based on constitutional law begin at the High Court level but in the U S, it begins right from the district level, further listing some illustrations.He compared their status in India and the U S and threw light on the case laws on Affirmative Action in both nations. He explained the Regents of University of California vs Bakke (1978) case and the United States vs  Carolene Products Company case. Dr Chandrachud also explained the theories provided by the Regents of the University of Cal. vs Bakke case i.e. Theory of Diversity and Lingering Effects Theory. He also talked about the creamy layer theory doctrine debate in India and in contrast with statements of Justice Marshall, who was the first Afro-American Justice in the U S Supreme Court. He then concluded his address by quoting Justice Blackman’s statement that the Universities select the children of powerful people like donors and fundraisers, thus the universities don’t take into account the children of backward classes. Lastly, he quoted “In Order to Get Beyond Racism, We Must First Take Account of Race.”Soon the Q&A session commenced, where the doubts from the attendees were entertained by Dr Chandrachud. The session was a very informative part of the event, as a deeper aspect of the topic was explored, which proved to be very insightful.