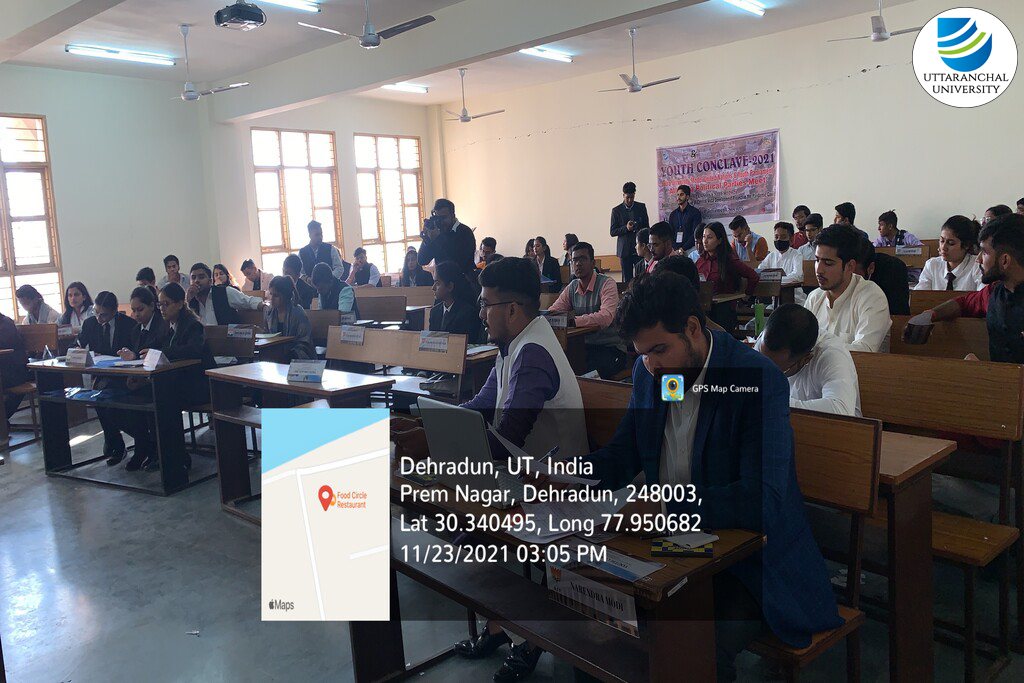 Law College Dehradun, Faculty of Uttaranchal University organized Youth Conclave, 2021, Intra – college Model United Nations and Youth Parliament under the aegis of Youth Parliament Society, on 23 November 2021. The event was a simulation of the United Nations and Youth Parliament. The event commenced with the warm welcome of Pro VC & Dean, Law College Dehradun, Prof (Dr) Rajesh Bahuguna, and HoD Prof (Dr) Poonam Rawat. The session was anchored by Mr Hitesh Bisht, who with his amiability was able to hold the attention of the audience. It then proceeded with the introduction of the event and the committees and their agendas.

Two committees were set up, namely:

Both the committees witnessed heated discussions and debates on their agendas.

AGENDA- Deliberation on the issue of a central vista development project in the COVID pandemic.

Following the enlightening speech of Prof. Dr. Rajesh Bahuguna, the event was declared open by Ms Saakshi Suneja, Secretary-General of the Youth Parliament Society of LCD. The participants then proceeded to their MUN committee hall and YP committee hall, respectively.

The committee began with the President Mr Akshay Chawla explaining to the delegates the voting procedure, chits, moderated and unmoderated caucus, working paper, and other nuances of the working of UNGA- DISEC. The Executive Board comprised of Mr. Akshay Chawla; President, Mr Deshdeep Singh; Vice-President, and Ms Ritim Mangla; Rapporteur. Then the roll call was taken by Ms Ritim Mangla and after which the delegates were asked to establish a motion for the GSL which was then set by the delegate of China for a per speaker time of 60 seconds. 10 delegates were shortlisted for the same but after the completion of GSL by 7 delegates; an unmoderated caucus was established by the delegate of India for a total time of 10 minutes. After completion of GSL of 8 delegates, another motion for moderated caucus proposed by the delegate of India was passed by the committee on the sub agenda- ‘ Security of States’ for a total time of 15 Minutes per speaker time of 90 seconds.

The committee commenced at 10:45 am, 23 November 2021 with the executive board of three members, Mr Lakshya Agarwal as President, Mr Abhijeet Kashyap as vice – president and Ms Aarushi Singh as the secretary. At the very onset, Mr. Lakshya Agarwal (President, AIPPM) explained the rules and procedures that are to be followed in a Youth Parliament. He briefed the participants about the different sessions of YP and also the role of the executive board. Then the roll calls were taken at 11:00am, and at 11:16 am and the General speaker list (GSL) was framed.

The first speech was given by the leader of the ruling party i.e., Mr. Narendra Modi. The delegate expressed his views regarding the agenda of the committee,  that was “Deliberation on the issue of Central Vista Development project in the pandemic COVID”, the discussion was then followed by the next speaker, Mr. Deepender Singh Hooda and so on. The minimum time given to a speaker was 60 seconds which was then followed by POI’s, and POO’s. Later on the Executive Board advised the delegates to pass on chits instead of raising their placards. The last speaker of the GSL was by default the leader of the opposition party i.e., Ms. Sonia Gandhi.

The session resumed at 02:30pm, with the discussion on sub agenda. The sub-agenda was passed by the amenable agreement of both, the ruling and the opposition party. The speaker’s list for the sub agenda was commenced by Mr. Deepender  Hooda, member of the opposition party and a total of 10 members of each party expressed their views on the sub – agenda. During the session Ms. Sakshi Suneja, Secretary General and Ms. Niharika Jha, Deputy Secretary General took the feedback from the delegates.

Hon’ble Chancellor, Shri. Jitender Joshi, Vice – Chancellor, Prof. Dr. Dharam Buddhi and Dr. Rajesh Bahuguna, Dean, Law College Dehradun, marked their presence in the committee room and witnessed the working of the committee. The committee was concluded by the speech of Mr. Narendra Modi, Leader of the ruling party.

After the conclusion of the committee an informal session took place, where the delegates interacted with their fellow delegates through informal chits that were firstly passed on to the E.B.

Congratulations to the YPS team of Law College Dehradun for organizing the remarkable Youth Conclave, 2021 which sailed smoothly and reaped into a successful event.