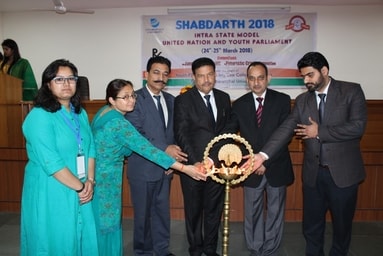 Law College Dehradun organized ‘Shabdarth-2018’ an Intra State Model United Nation and Youth Parliament under the aegis of its Youth Parliament Society on 24th and 25th March 2018 in which more than 150 participants from top 10 universities and colleges of the state participated enthusiastically. Hon’ble Chancellor Shri Jitender Joshi, the Chief Guest of the occasion inaugurated the event with the Lamp Lighting Ceremony in the presence of Vice Chancellor Prof. (Dr.) N.K. Joshi, Principal Prof. (Dr.) Rajesh Bahuguna, Dr. Poonam Rawat and other faculty members of Law College Dehradun on 24th March.

The Youth Parliament incorporated two international committees and Janmanch for the competition.

United Nations Human Right Council: Various delegates discussed about the condition and plight of women and children in war affected zones. The delegates debated on various problems faced by women and children in refugee camps regarding Education, Food, Rape, Health and Sanitation. They also discussed about the Humanitarian Law and its application globally. The discussion went on exemplarily and the Best Delegate Award was bagged by Sabreen Ahmad of UPES while the High Commendation Award was given to Uddyan Mamgain of Kendriya Vidyalaya.

Futuristic Crisis Committee: This committee was executed by Mr. Rishindra Vikram Singh as the Chair, Ms. Harshita Chauhan as Vice Chair and Dhyutisha Rawat as the Scribe of the Committee. The topic of discussion was based on a future situation which was related to the intrusion of Pakistan in Kashmir Valley in the year 2034. The delegates outcasted the interest of China in support of Pakistan. In the end it was decided that there should be an open war between India and Pakistan to settle the issue and Line of Control should be restored. In this Akshat of UPES was awarded the Best Delegate Award while Shobhit Singhal, again from UPES received the High Commendation Award.

Janmanch: Here the participants played the role of different leaders including Mr. Narendra Modi, Mr. Rahul Gandhi, Dr. Manmohan Singh & the like and delivered their speeches. The focus of the discussion in Janmanch was Ram Mandir dispute and the future of fringe groups in India. The participants put forth their view points on various issues related to the above themes. While criticizing the activities of fringe groups the participants representing various portfolios unanimously expressed their opinion that harsh steps should be taken against such groups. Kumar Kshitiz from UPES was declared as the Best Delegate while Yash Mishra and Vivek Rungta of LCD received the High Commendation Award of the committee.

The mega event concluded on a successful note on 25th March with the Prize Distribution Ceremony in the presence of the Dean and Principal Prof. (Dr.) Rajesh Bahuguna. He, in his speech, stated that Model United Nation is an academic activity in which students get an opportunity to learn diplomacy, international relations and the United Nations which further enables them to develop a deeper understanding of current world issues. Head of the Department, Dr. Poonam Rawat appreciated the students for their relentless efforts in carrying out the event in a successful way. Mr. Razit Sharma, Chairperson of Youth Parliament Society in his concluding speech conveyed his heartiest congratulations to the office bearers and team members of Youth Parliament Society for their tenacious effort and labor in making the event successful. The participants who flocked from all corners of the state expressed their appreciation and gratitude to the society and the host college for providing them such a valuable opportunity.