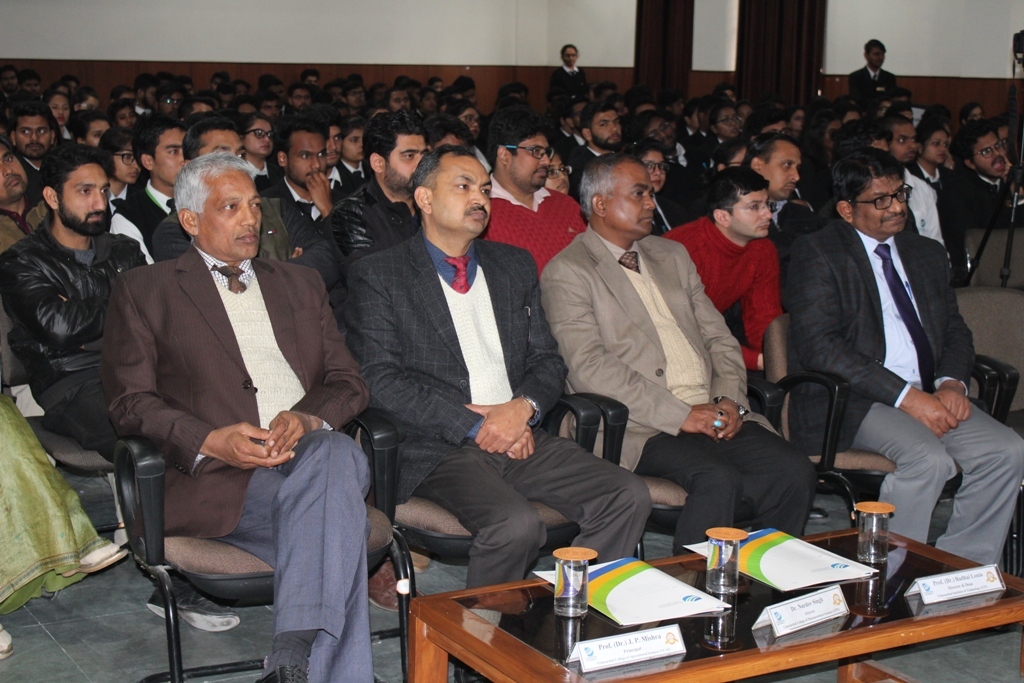 “Literature is one of the most significant expressions of humanity” – P. T. Burnam

“Shashtra Samuh” – Intercollegiate Literary Festival 2017 was organized by Law College Dehradun under the aegis of the Debating Society. The festival commenced on 2nd December, 2017  with a series of literary events.

Legal papers might not have the glamour of Moot Courts but writing is arguably a very important skill to master as a budding lawyer. The first ever university-pan Literary Festival-“Shashtra Samuh” organized a competition of Legal Essay Writing on 2ndDecember, 2017.

A hot and recent topic, “Delay in framing the Uniform Civil Code will hit hard on India’s roots of ‘Secularism’ in Preamble” was given to test the writing skills of the students.

A genre of literature, poetry, has been the greatest way of expression of emotions by intricately using language in distinctive style and rhythm.

Poetry Writing and Recitation (Hindi & English) was held as a part of the grand Literary Fest. The event witnessed a large number of participation from students from all the constituent colleges of the University. The first round of the competition was conducted, where the student participants mesmerized the judges by their writing and recitation skills.  The themes expressed by the participants were very interesting and thought provoking.

The panel of judges, including Dr. Prabha Lamba (for English) and Miss Shruti (for Hindi), was filled with dilemma and found it difficult to judge the beautiful presentations put forth by the participants. The final round was held on 5th December, 2017 in which Anushka Joshi and Aman Singh emerged as the winners.

Turn Coat is a form of debate where the speaker literally debates against himself. The speaker starts by taking a stance on the topic and switches sides after a specific duration of time. The first ever university-pan Literary Fest ‘Shashtra Samuh’ organized the competitive event entitled ‘Turn Coat’.

Many students participated to prove their rhetoric skills. Turn Coat (English) was judged by Dr. Fatimah and the Turn Coat (Hindi) was judged by Mr. Vaibhav Uniyal. The final event saw Sheva Khan  and Ajay Pratap as winners in English and Hindi respectively.

Continuing the exciting series of literary events which started on 2nd December, 2017, the 2nd round of Asian Parliamentary Debate commenced at 1:30 pm in the Seminar Hall, Law College Dehradun on 4th December, 2017. Three rounds were conducted with three motions given for each round with 5 matchups composed of 2 teams each.

Adjudicators Atulya, Harshita, Badal, Jatin and Vidhush adjudged the various matchups under the guidance of the core adjudicators Anjan,Snigdha and Shubhi. After an exciting wrap up of the semi-final rounds between Lunachicks & Cereal Killers and Victoria’s Secret & Law Reformers, Lunachicks and Victoria’s Secret were adjudged as the finalists for the grand finale to be conducted on 5th December, 2017.

Eventually the opposition team ‘Lunachicks’ with Twinkle Purohit, Neera Sinam and Anannya Bhatt proved their might and emerged as winners.

Hon’ble Chancellor Mr. Jitender Joshi was the Chief Guest of the Grand Finale and appreciated the commendable performance of all the participants. He also gave away the trophies and certificates along with a cash prize of Rs. 2100 to the winners of all the events. The event was witnessed by Dr. Abhishek Joshi, Director-Student Affairs and IT Services and Deans & Directors of all the constituent colleges. In his address, Prof. (Dr.) Rajesh Bahuguna appreciated the great effort and initiative taken by the Debating Society of Law College Dehradun in organizing the grand Literary Fest.