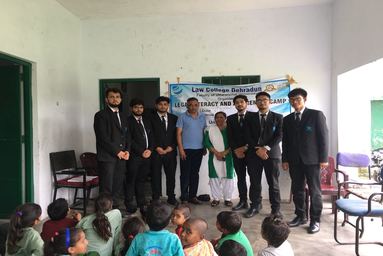 The National Service Scheme (NSS) Members of Law College Dehradun organized “Child Rights Awareness Program” on 11th August 2018 in a Primary School near GRD Academy in Kehri Gaon. The Awareness Program was carried out by a 6 member team consisting of Akshay Gautam, Ayush Garg, Abhishek Sahu, Rahul Negi and Shashank Pant led by Ashutosh Singh.The purpose of this event was to ‘update the children of their basic rights and privileges and be more aware of the dangers near them’. The Awareness Program was conducted among an audience of around 30 students including the Teacher (Shrimati Sushma Palak) and the Principal of the school (Shri Santosh Kumar).

The event commenced with an ‘Introductory Speech’ delivered by Ashutosh Singh followed by a description on the ‘Importance of Education’ by Akshay Gautam. He emphasized on the day-to-day activities and significance of body language followed by a speech by Shashank Pant on ‘Child Labor’. The session turned out to be an interactive one wherein the bright students quite boldly shared their past experiences and knowledge. The response received was quite overwhelming. A discussion on ‘Basic Safety Measures in our daily lives’ was also made. Ayush Garg then gave an ‘Introduction on POCSO (Protection of Children from Sexual Offences) Act, 2012’ in which he elaborated the different scenarios where a person can be considered as being sexually harassed. The event was concluded with the distribution of books on basic child rights and offences with remedies by the Society Members to the children. The passion and commitment with which the volunteers indulged guided the young minds to inculcate moral values and help them in their overall personality development.