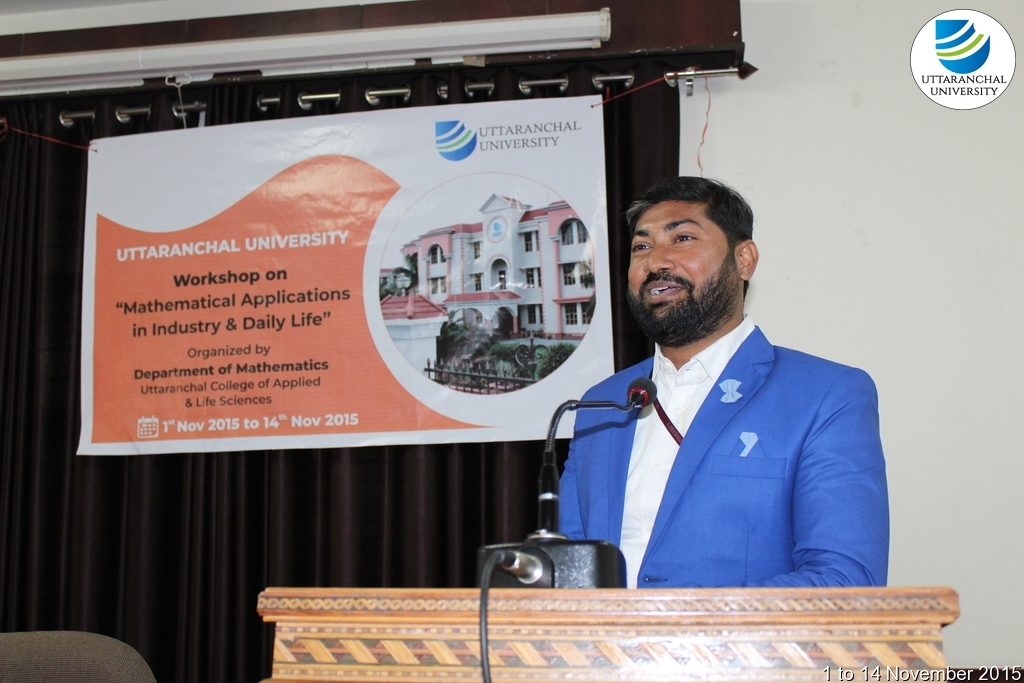 was the Resource Person. Apart from the faculty members of Uttaranchal College of applied and Life Sciences, more than 60 members from various Universities and Colleges participated in the event.

Dr. Ajay Kumar was the Master of Ceremony. On the outset, he invited Prof. (Dr.) Ajay Singh (Principal, UCALS) to felicitate Hon’ble Chancellor Sh. Jitendra Joshi and Hon’ble Vice Chancellor Prof. (Dr.) S. C. Joshi. Thereafter, Dr. Srivastava felicitated all the Resource Persons. The programme commenced with the lighting of the auspicious lamp followed by the recital of University Kulgeet.

In his address, Prof. (Dr.) S.C. Joshi welcomed all the participants and emphasized upon the need of such programmes for the over-all growth of faculty members and the participants. He further stated that ‘Mathematics had played a key role in the overall growth of the humanity and society.

Dr. P. K. Sharma, Associate Professor, (DAV PG College, Dehradun) started his presentation by the statement: Mathematics is in principle inexpensive. As the old joke says, a mathematician needs only paper, a pencil, an easy chair and a waste basket. Also, the criterion for success in mathematics is by and large universally accepted. This makes mathematics an attractive ‘investment’. Moreover, a mathematical result is valid forever. It may fall out of fashion, or fall outside the current area of application, but even the oldest known mathematical formulae – such as that for solving quadratic equations, known 2400 years ago by Babylonians, Chinese and later the Greeks before being crystallized into its present form in 1100 AD by a Hindu mathematician called Baskhara – are the bread and butter of present-day elementary mathematics. Alas, the downside is that the results are usually not immediately applicable and therein lies the risk. Who wants to ‘invest’ in something that may not lead to applications for several hundred years? The good news is that the distance between theory and application is becoming shorter and shorter.

Dr. T. S. Chauhan, Associate Professor, (Bareilly College Bareilly) started his speech by saying Mathematics can be compared to a pyramid. On the top of the pyramid are applications of mathematics to health, weather, movies and mobile phones. However, the top of this pyramid would not be so high if its base were not so wide. Only by extending the width of the base can we eventually build the top higher. This special feature of mathematics derives from its internal structure. A good modern application of mathematics can typically draw from differential equations, numerical analysis and linear algebra. These may very well draw from graph theory, group theory and complex analysis. These in turn rest on the firm basis of number theory, topology and geometry. Going deeper and deeper into the roots of the mathematics, one ends up with such cornerstones of logic as model theory and set theory.

It is clear that mathematics is heavily used in large industrial projects and in the ever-growing electronic infrastructure that surrounds us. However, mathematics is also increasingly infiltrating smaller scale circles, such as doctors’ reception rooms, sailboat design and of course all kinds of portable devices. There has also been a change in the way mathematics penetrates our society. The oldest applications of mathematics were probably in various aspects of measurement, such as measuring area, price, length or time. This has led to tremendously successful mathematical theories of equations, dynamical systems and so on. In today’s world, we already know pretty accurately for example the make-up of the human genome, yet we are just taking the first steps in understanding the mathematics behind this incredibly complex structure of three billion DNA base pairs. Our understanding of the mathematics of the whole universe of heavenly bodies, even going back in time to the first second of its existence, is better than our understanding of the mathematics of our own genes and bodies.

What is the difference between the hereditary information encoded in DNA and the information we have about the movements of the heavenly bodies? Is it that we have been able to encapsulate the latter into simple equations, but not the former? Or is it perhaps that the latter has a completely different nature than the former, one that makes it susceptible to study in terms of equations, while the former comes from a world governed by chance, and algorithms, a world of digital data, where the methods of the continuous world do not apply?

Dr. Shankar Lal, Assistant Professor, (HBNGU Campus, Tehri Garhwal) has given his view on another well-known instance of mathematics in society is cryptography in its various guises. There exist numerous situations in which data must be encrypted such that it can be publicly transmitted without revealing the content. On the other hand, sometimes a party may find it vitally important to break a code that another party has devised for its protection. Some companies want to examine the data of our credit card purchases in order to have access to our shopping patterns. Some governments want to do the same with regard to what they deem less innocuous patterns of behaviour. Cryptography is a typical example of the mathematics of the digital world. Digital data has become important in almost all fields of learning, a natural consequence of advances in computer technology. This has undoubtedly influenced the way people look at fields of mathematics such as number theory, that were previously thought to be very pure and virtually devoid of applications, good or bad. Now suddenly everybody in the possession of big primes has someone looking over their shoulder.

This infiltration is quite remarkable and elevates mathematics to a different position from that which it previously occupied. Mathematics is no longer a strange otherworldly subject, practised by a few curious geniuses but for most people best left alone. The spread of microprocessors into every conceivable aspect of our everyday life has brought heavy-duty computing into our homes, into our classrooms and into scientific laboratories of all kinds. Naturally it is unnecessary for everyone to understand all this computing, which can take place in microseconds without our noticing. But it means that anyone who refuses to acknowledge the role of mathematics will see the changing techno sphere as something strange and in the worst case as something irrational or even frightening. A very good way to understand and come to terms with an important aspect of modern life our ever-growing dependence on interpreting digital data is to have a basic knowledge of mathematics.

Basic knowledge: what does this mean and how is it attained? Clearly, this takes us into the realm of mathematics education. Strictly speaking, education is not an application of mathematics, but it is nevertheless of increasing importance to the mathematical world. Every time the OECD’s PISA (Programme for International Students Assessment) results arrive, some people ask why some countries always seem to score highly in the mathematical skills of 15-year-olds. Without attempting to answer this difficult question, one must admit that it is important and that maths education will face huge challenges in the future, not least because of the infiltration of mathematics into all levels of society. This infiltration clearly has much to do with the revolution triggered by the development of computers over the last fifty years. Has this revolution arrived in schools, and in maths education? Most students now own a computer with an Internet connection. This is used for games, chatting, text processing and surfing, but do they use the computer for mathematics? Are mathematical modelling (ambitious problem solving) or algorithmic thinking (expressing mathematics in such a way that the computer can handle it) taught at school? There is much that can be done here, in curricula, in textbooks and in everyday life at school.

Dr. Srivastava concluded his address by proposing a Vote of Thanks towards one and all present.