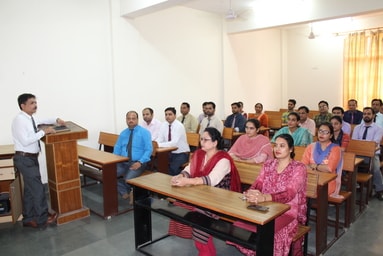 A Faculty Induction Programme was conducted for all the newly appointed faculty members in School of Applied and Life Sciences from 22nd – 26th July, 2019.

The new entrants completed formalities related to joining in the Registrar office.

The third day included in its schedule, introduction of new faculty with other faculties of the department and subject distribution. All the new members were asked to open Google Site Account and prepare their Lesson Plans.

The Induction Programme concluded on 26th July with the introduction of new members to various committees and clubs of SALS. They were also introduced to the Heads of Cultural/Sports/Anti Ragging and other committees. The new members were included in various committees and were explained about their roles in the same. New faculty members shared their views and appreciated the warmth with which they were welcomed by one and all. They also admired the working environment of the college and promised to give their best to Applied Science College and thus to Uttaranchal University.