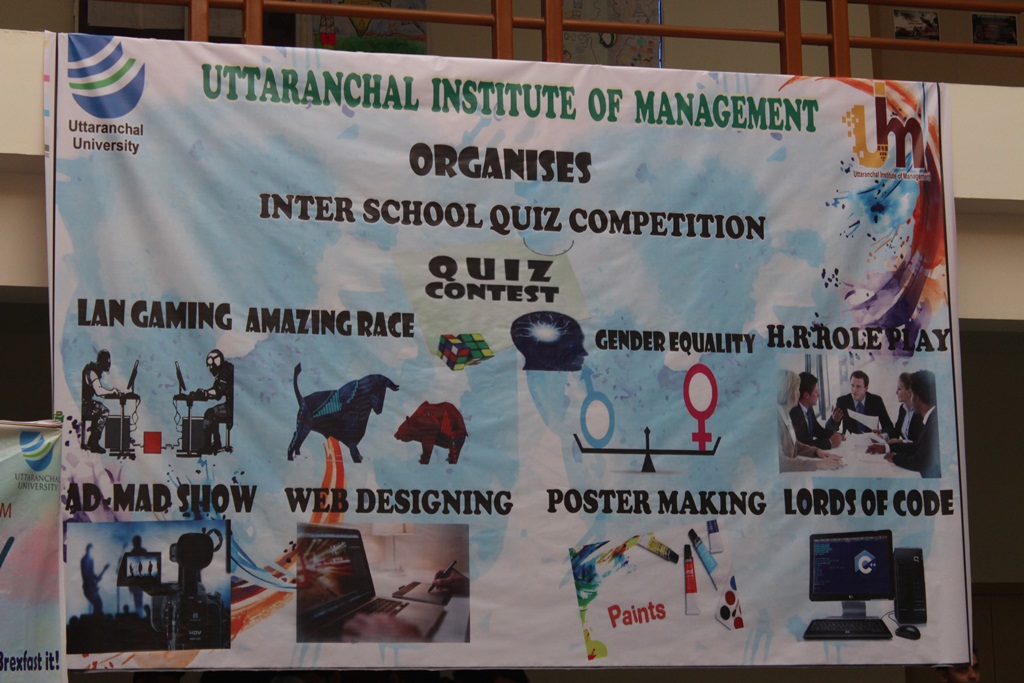 Department of Computer Applications, Uttaranchal Institute of Management organized an Inter-School Quiz Competition on 2nd December, 2017, in the Seminar Hall.

In all, 120 schools were invited to participate in the event. The programme started at 9.30 a.m. It was graced by the presence of Dr. Abhishek Joshi, Director-Student Affairs and IT Services, who was also the Chief Guest for the event. He appreciated the initiative and expressed that such academic events must be conducted frequently.

Prof. (Dr.) N.K. Joshi, Vice Chancellor of Uttaranchal University, felt that the organization of such an event was truly overwhelming and said that he went down the memory lane and felt highly nostalgic about his school days.

Dr. Pradeep Suri , Director-UIM, welcomed the students and cheered them up for participating in the contest with a great zeal. He further said that the event was very well and systematically organized.

The first round was ‘Toss-up Round’ followed by ‘Rapid Fire Round’ and finally the ‘Category Round’. The Category round further consisted of four sub-categories: Entertainment, Sports, Current Affairs and Punch Line. The audience was also involved after each of the rounds through Audience Questions, which was thoroughly enjoyed by them.

The questions put forth to the teams were captivating, exciting and made the audience applaud spiritedly when the teams answered correctly. The competition was tough.

The result of the exciting and thrilling battle was as follows:

Dr.SonalSharma (Head- Department of IT) was the Event Coordinator, she was assisted by Ms.Pooja Gupta and Ms.PrabhjotKaur.

The event concluded with a Vote of Thanks proposed by Dr. Pradeep Suri.