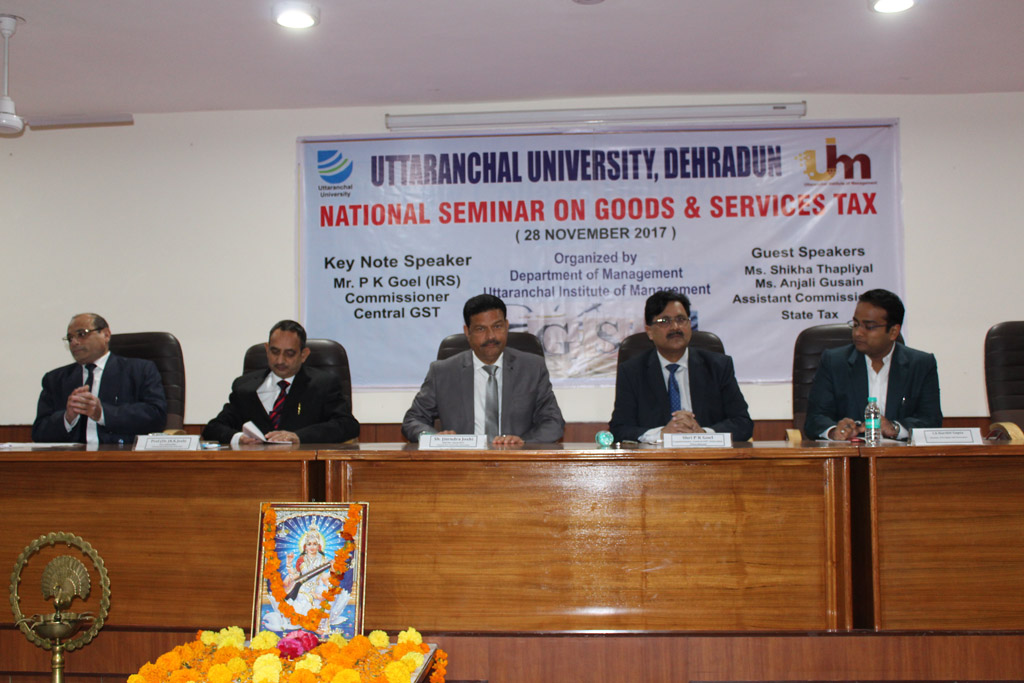 The seminar was inaugurated by Hon’ble Chancellor, Shri. Jitender Joshi. He felicitated the Chief Guest & Keynote Speaker and the Guest Speakers of the day. This was followed by lamp lighting, Saraswati Vandana and a dance performance by Ms. Tithi Das.

In his Welcome Address, the Vice Chancellor, Prof.(Dr.)  N K Joshi, extended a warm and heartiest welcome to the Guest Speakers and introduced them to the audience. Dr. Joshi shared a brief history of the journey of GST right from the year 2000 when the then government lead by Shri Atal Bihari Vajpayee initiated the GST discussion till 1st July, 2017 when it was finally implemented. Shri. Jitender Joshi spoke about GST and paraphrased it as One Nation One Tax One Market. Dr. Abhishek Joshi, Director-Student Affairs and IT Services graced the event by his presence and enlightened the audience by explaining how the jelly form of GST is heading towards concretization.

Mr. P.K. Goel, Commissioner, (IRS), Central GST was the Keynote Speaker for the day. The First Technical Session was chaired by Dr. Pradeep Suri and he introduced the topic and the concept of the seminar to the audience. He informed how 170 nations had adopted GST successfully and how in just 4 months the old GST in India is moving towards success by every day updation in the GST Bill by the GST Council. He also expressed his opinion that the promised benefits of GST to a common man were not being actually passed on to the concerned section.

Dr. Suri further invited the Keynote Speaker, Mr. P.K. Goel, for his expert address. Mr. Goel commenced his session by introducing Goods & Services Tax (GST), the single largest reform in the country after independence. He showcased the journey of GST from conceptualization to implementation on 1st July 2017. Mr. P K Goel also spoke about how GST replaced a large number of taxes. He explained the GST, SGST, IGST and GST Council.  He elaborated how the Center and State gave their powers to the GST Council for the implementation of GST. Mr. P K Goel clarified certain concepts regarding GST being a consumption based tax, destination based tax and value added tax. He also enlisted the initiatives taken by the government to help the common man of India to understand and follow GST. He informed about the setting up of GST Suvidha, a website for help and guidance and also shared the toll-free numbers intended for the same. At the end of his session he invited and honored the queries of the audience.

CA Harshit Gupta was the second speaker of the First Technical Session. He started his session with A Role Play to clarify the GST, SGST & IGST Tax Collection & Distribution System. He shared many technical aspects of GST with the audience.

The Second Technical Session had Ms. Shikha Thapliyal, Assistant Commissioner, State Tax and Ms. Anjali Gusain, Assistant Commissioner, State Tax as speakers. This session began with the felicitation of the speakers for the session. This session was also chaired by Prof (Dr.) Pradeep Suri. He introduced the speakers to the audience and then invited Ms. Shikha Thapliyal to share her expertise on GST with the audience. She gave an interesting session by explaining the concept of Arth (Economics) & GST relationship, and clarified the dilemma regarding Goods and Services categorization and conflict of IGST. In the concluding segment of her session she discussed E-Way Bill under GST and explained how the taxes are paid and the route for the consignment is pre-decided. She also emphasized on the need of vigorously conducting an awareness campaign on GST registration. Ms. Shikha also revealed the GST- Mitr Campaign conducted in the hilly areas of Uttarakhand and informed about getting 4000 registrations since the implementation of GST by the Government of India.

Ms. Anjali Gusain was the second speaker for the Second Technical Session. She spoke about the process of registration in GST. She explained in detail the What? When? Why? Who? and Where? of the GST Registration Process.

Prof. (Dr.) Pradeep Suri, summarized both the Technical Sessions and highlighted the benefits of GST.

Valedictory Ceremony including Certificate Distribution to all the participants was the last segment of the event.The seminar concluded with a Vote of Thanks proposed by Prof. (Dr.) Pradeep Suri.