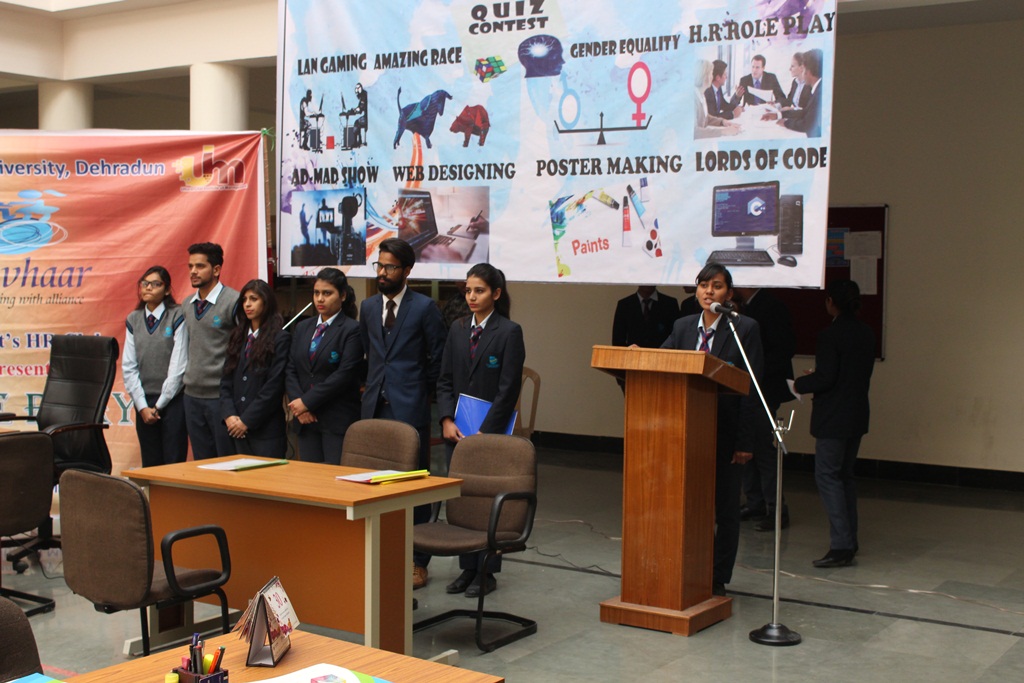 “Vyavhaar”- the HR Club of Uttaranchal Institute of Management, organized ‘Role Play’ on 2nd December, 2017.  The Chief Guest of the event was Dr. Abhishek Joshi, Director-Student Affairs and IT Services, Uttaranchal University. He stated that he was delighted to witness the event and students’ acting talent.

Vice Chancellor Prof. (Dr). N K Joshi addressed the whole team of UIM and encouraged the students to come up with more innovative ideas regarding the various activities to be performed in the coming future.

Prof. (Dr.) Pradeep Suri, Director-UIM briefed the guests regarding how this event was planned, prepared and executed by the Club Head Mr. Shailesh Chamola and his team of faculty members and students.

In the contest, the participating teams had to perform a Role Play on various given themes.

‘Role Play’ is an active learning tool for various concepts. In this, the performer gets embedded in the role, feels the role needs and then performs it. It is a spontaneous human interaction involving realistic human behavior under artificial or simulated environment in which the participants are provided with a role brief and a set of circumstances which they need to enact. This is a technique in which some real or imaginary situation involving human interaction is presented and spontaneously acted out by the participants. The purpose of role play in business schools is to increase student interest and involvement, and have its practical application through making choices and receiving feedback on them, and refining their understanding of concepts.

The event was competitive in nature. The participating teams were adjudged by the jury on a set of pre-defined criteria. The defined criteria were Students’ Theme Narration, Acting Skills, Theme Presentation, Communication and Coordination during the Role Play.

The winner of the event was the team enacting on the theme of ‘Organizational Politics’. The second-best performance adjudged was by the team which enacted on ‘Change Management.’

The Master of Ceremony was Ms. Shipra Sharma from MBA-III Semester.

The event concluded with the Valedictory Ceremony wherein the winners were presented Certificates by Prof. (Dr.) Pradeep Suri. Dr. Suri concluded the event with a Vote of Thanks.