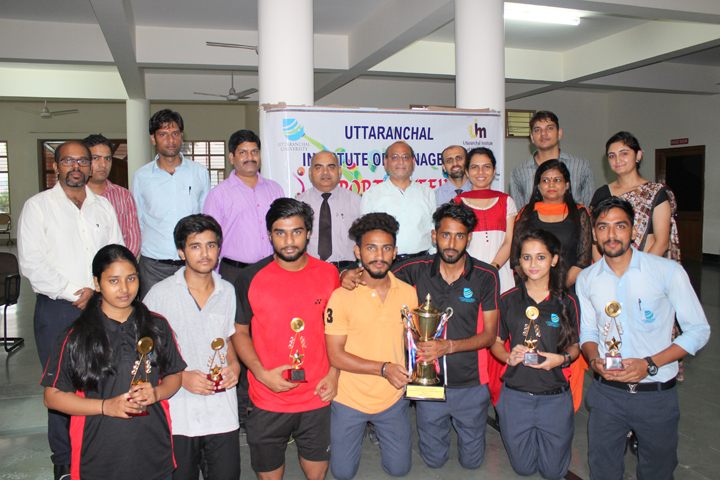 To encourage student participation in extra-curricular and sports activities the ‘Sports Club’ of Uttaranchal Institute of Management organized a series of sports tournaments. Such activities ensure their overall development providing a platform to showcase their talents and skills.

The 1st round of all the 3 tournaments was played simultaneously and was termed as the knock-out round.

Badminton Tournament : 1st round started with matches of 11 points each and continued till 20th September, 2017 in which 48 participants including boys and girls, put in their best efforts. In all 24 matches were played and 24 players were shortlisted. 16 boys and 8 girls were selected in the knock-out round.

The 2nd round was played on 21st September, the best of three sets comprising of 11 points each were played. This round had 12 matches and as a result thereof, 8 boys and 4 girls were selected for the 3rd round.

The 3rd round was conducted on 22nd September, boys competed in 4 matches, which was again best of the 3 sets, each match consisting of 11 points.4 boys were shortlisted for the Semifinals.

Finally, on 23rd September, the Semifinals were scheduled,   in which 4 boys and 4 girls competed and the selected 2 participants in each category made it to the Finals which were played the same day.

Round 2 for boys was played on 20th September involving the 8 boys who were the winners of Round 1.

Semifinals were scheduled on 21st September involving top 4 players, who had proceeded further from the previous rounds. The match was played in a best of 3 games, 15 points per game format and so the 2 winners of the Semifinals were Takshshil Upreti and Shubham Tiwari from boys and Rakhi Rawat and Jigyasha Rawat from girls.

Volleyball : The knock out tournament started with 8 teams .The first round was scheduled on 18th September, 2017 between MBA-I Year and BBA-II Year. In this match MBA-I Year was the winner.

The next match was held on 19th September between BCA-I Year and BBA-I Year and the winner was BBA- I year.

On 20th September two matches were scheduled. The first match was played between B.Sc.(IT)-II year and BCA-II Year. Winner was BCA-II Year.

The event was a grand success. All the Winners and Runners-up were felicitated by Prof. (Dr.) Pradeep Suri, Director UIM.