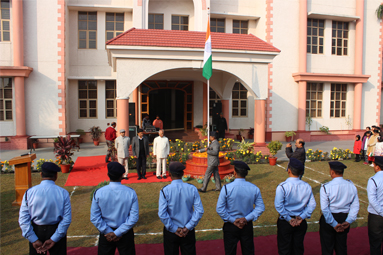 Hon’ble Chancellor Mr. Jitender Joshi, along with the dignitaries, expressed gratitude to the National Heroes for their supreme sacrifice and offered flowers on the pedestal of the reverend “Wall of Heroes”.  He presided over the function after inspecting the ‘Guard of Honor’ presented by the Security Guards of the University. To commemorate the anniversary of the adoption of the Indian Constitution he unfurled the tricolor flag and all in unison sang the National Anthem and expressed the joy of freedom and democracy. Republic Day represents the true spirit of the independent India. Every heart was full of the spirit of nationalism and patriotism which was visible through their eyes.

Hon’ble Vice Chancellor Prof. (Dr.) N.K.Joshi addressed the august gathering and awakened everyone’s feeling of pride towards motherland. He elaborated the sanctity of the occasion and highlighted the role played by the Constitution makers, with particular reference to Dr. B.R. Ambedkar. He stated that in India the majority population is constituted by the youth below 25 years of age. Citing examples from the struggle of Independence he further stated that by the age of 25 many of our heroes contributed through their devoted action leading to the attainment of freedom, thus inferring that the youth have the power to attain the seemingly impossible. According to him, the performance of one’s duty devotedly is also a service towards the nation. He affirmed that Justice, Fraternity, Equality and Liberty formed a strong foundation leading to the constitution of a Sovereign Socialist Secular Democratic Republic. He concluded by stating the need of collective responsibility and action to transform India into a developed nation and a haven for one and all.

Mr. G.P Sharma, Managing Director, Uttaranchal University, showcased the highlights of the Indian Constitution which gave India’s citizens the power to govern themselves by choosing their own government. Stressing on the significance of the day he claimed that he was the only one present there to have experienced life and living in pre-independence India. He shared his experience of discrimination making one and all present feel grateful for the invaluable gift of freedom. Dealing with historical facts he stated that the Constitution was adopted by the Indian Constituent Assembly on 26 November 1949, and came into effect on 26 January 1950 with a democratic government system. 26 January was chosen as the Republic Day because it was on this day in 1930 when Declaration of Indian Independence (Purna Swaraaj) was proclaimed by the Indian National Congress as opposed to the Dominion status offered by British Regime. He concluded by reminiscing the Golden Heritage of India and expressing his pride in being a part of an Ever Shining India.

Hon’ble Chancellor of Uttaranchal University, Shri. Jitender Joshi, expressed his gratitude to the reverend freedom fighters whose altruistic endeavors won us independence. He extended his warm wishes to one and all on the occasion of 69th Republic Day of India.

The program concluded with a Vote of Thanks delivered by Mr. Nakoti, Estate Officer and distribution of sweets to one and all.

Indeed it was an occasion when everyone showed their love and respect for the nation. All the heads were held high by the shared experience of freedom, peace, democracy and unity in diversity.

Our ancestors gave us a glorious past,

We need to create the future,

Lead the change and become a real INDIAN.