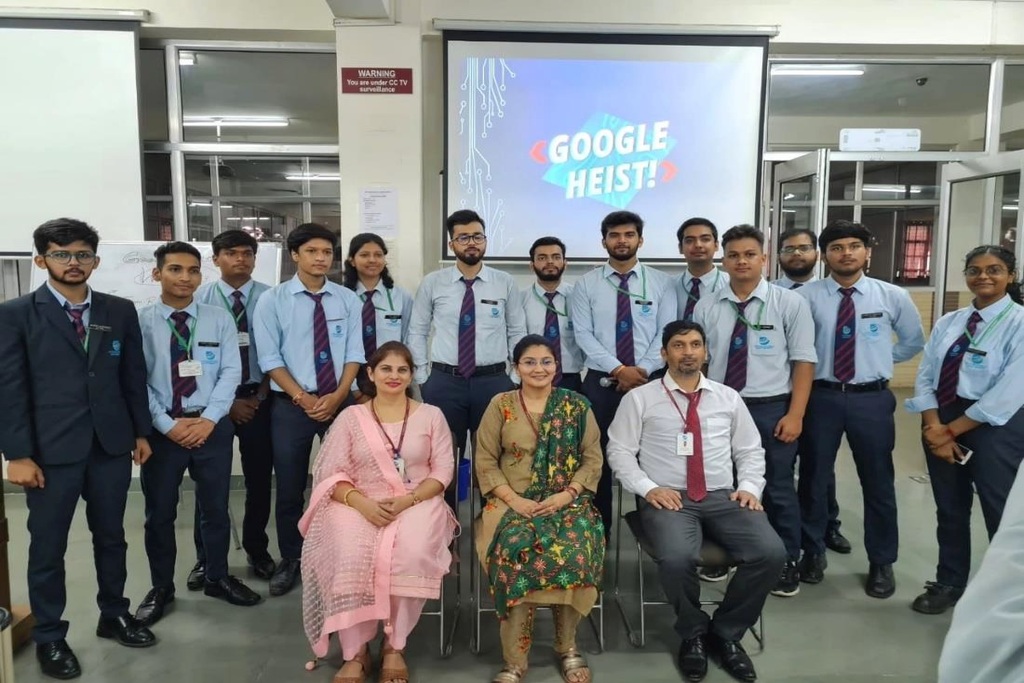 Uttaranchal University Computer Science Society (UU-CSS), under the supervision of Uttaranchal Institute of Technology, organized an event titled “Google Heist” for students of B.tech. (C.S.E), BCA and B.Sc.(I.T) on September 20, 2021, Monday. The event commenced with the welcome note delivered by Shivam Balodi, President, UU-CSS. He talked about the event and welcomed Prof. (Dr.) S.D Pandey, Director, UIT, Uttaranchal University, Dr.Minakshi Memoria, HOD, CSE, UIT, Uttaranchal University, and Mr.Mukesh Pandey, Faculty Coordinator UU-CSS, Assistant professor, CSE, UIT, Uttaranchal University. The event was inaugurated with the lighting of an auspicious lamp by all dignitaries namely Dr. S.D Pandey, Dr.Minakshi Memoria, and Mr.Mukesh Pandey. Dr. S.D Pandey enlightened the students with his words of wisdom and emphasized that we should focus on scaling up our skills to survive this high-tech world. He told that everyone has a chance to learn, improve and build up their skills. Dr.Minakshi Memoria motivated the students to participate with zest and confidence and talked about how these kinds of events bring the students together on the same platform, boosting social interaction and exchanging many ideas and concepts.
After the welcome ceremony, the event started at 11:00 AM with the announcement of rules by Ashita Aswal, Assistant Secretary, UU-CSS. This was a team event, where all the participating teams were required to gather at the mentioned event venue and answer the questions being displayed on the projector screen. Participants were allowed to use the internet on their devices to search for the answers. They have to press the button of the digital buzzer provided to them on their devices if they know the answer. The fastest team to press the digital buzzer was allowed to answer first. Points were awarded for the correct answer and deducted for the incorrect answer. The team with the highest points at the end of the quiz was declared the winner. The questions were based on technical facts and information. All the teams participated with full enthusiasm and a total of 15 teams with 36 participants participated in the event. The result was announced on the spot and the team of Animesh Raturi, Vikrant Saini and Keshav Tomar from B.tech.(C.S.E.-2nd year) grabbed the 1st position, while the team of Manan Mandal, Soumil, and Anshuman Chauhan from B.Sc. (I.T.) 3rd year, and the team of Rohit Bisht, Anish Shrivastava and Keshav Chauhan from B.Tech. C.S.E. 2nd year hold the 2nd and 3rd position respectively. Then the certificates were distributed to winners by Dr.Minakshi Memoria, Mrs.Madhu Kirola, and Mr.Mukesh Pandey.