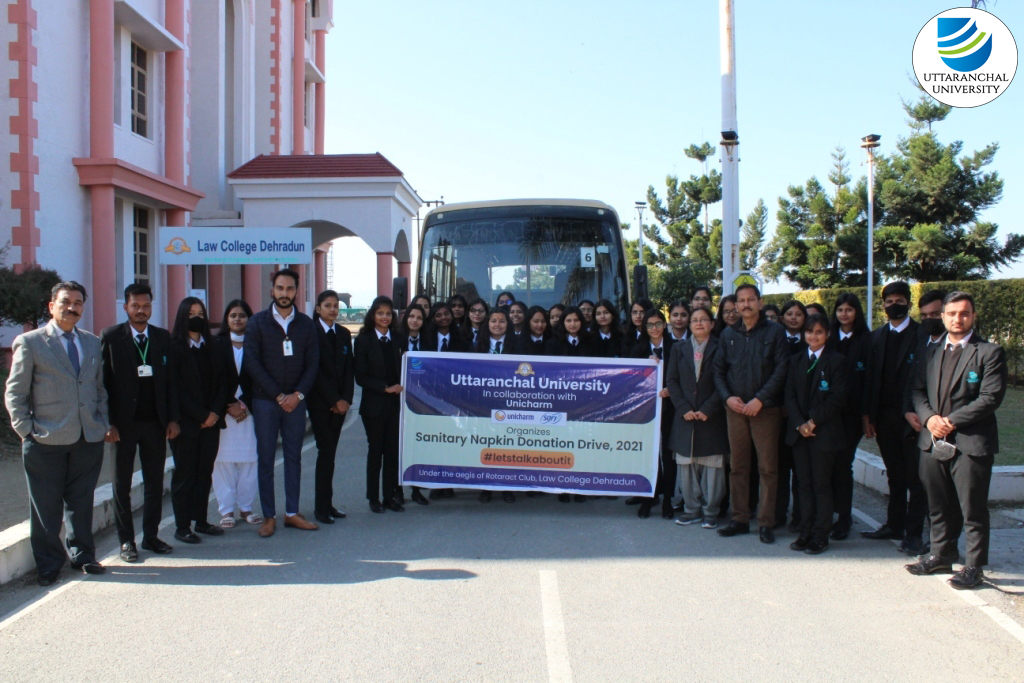 Law College Dehradun, Uttaranchal University under the aegis of Rotaract club in collaboration with renowned company Unicharm initiated a health and sanitation drive on 27 December 2021. Pro VC of Uttaranchal University & Dean Law College Dehradun, Prof (Dr) Rajesh Bahuguna stated that the students of the university have initiated a health and sanitation campaign which will be given the acronym #Lets Talk About It. In its preliminary stage the adopted villages of Uttaranchal University, Village Kotra Santur, Uparala Kollu Pani, Tarala Kollu Pani, Nakatpura, Nanda Ki Chowki along with their government schools would be approached for creating health and sanitation awareness. In the course of the above-mentioned campaign, a team of 31 volunteers of RCLCD under the leadership of Chairperson of Women Cell of the university, Prof Poonam Rawat, and President of Rotary Club, Mr Amit Chaudhary visited Pandit Sureshanand Joshi Saraswati Shishu Mandir located at Selaqui. Lectures were delivered on female health-related issues and sanitary pads were distributed among the female students of the school as well as women of the panchayats.

Prof (Dr) Poonam Rawat, Chairperson, Women Cell, Uttaranchal University addressed the students on awareness and health issues followed by the volunteers’ talk about the menstrual phenomenon and ways of dealing with it, the scientific and biological reasoning behind menstruation, correct usage of sanitary napkins and their disposal, the diet to be followed during the menstruation period, ways of self-care, and sustainable alternatives to sanitary napkins. The female volunteers shared their experiences related to menstruation, the ordeals faced by them, and how they can tackle the same, this in turn encouraged the students to talk about their problems and seek solutions for such problems. The interaction between the students and the club members included questions that widely covered several feminine issues and the Drive saw active participation of male volunteers of the club, encouraging the female students of all inhibitions about menstruation and encouraging them to start a conversation about the same in all spheres. The Drive was concluded successfully by distributing sanitary napkins among the students and staff of the school and women of the nearby village. The Drive was a step forward towards bringing about a more educated approach among young menstruates, one which is sustainable, inclusive, and free from all taboos.

Prof Poonam Rawat stated that the beneficiaries of quality pads were immensely happy while the students distributing pads were very much enthusiastic. Headmaster of Pandit Sureshanand Joshi Saraswati Shishu Mandir, Shri Vinod Bhatt not only thanked Uttaranchal University and Unicharm for their altruistic drive but also declared it exemplary.