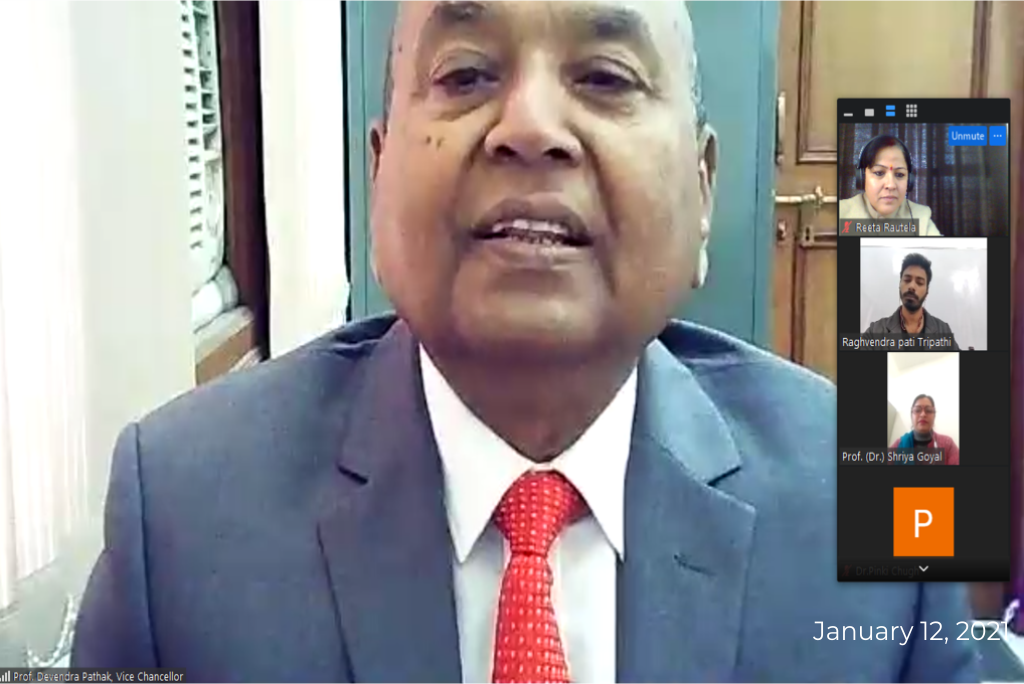 “Talk to yourself once in a day, otherwise you may miss meeting an intelligent person in this world.” ― Swami Vivekananda

Uttaranchal University organized a Webinar on ‘Teachings of Swami Vivekananda’ in observance of “National Youth Day” on 12th January, 2021.

The wholesome and much awaited event commenced with the Welcome Note delivered by Prof. (Dr.) Shriya Goyal, Dean – School of Liberal Arts, wherein she stated the significance of the day and highlighted the contributions of Swami Vivekananda.

Hon’ble Vice Chancellor of the University, Prof. Devendra Pathak graced the event by elucidating the illustrious ideals and eminent deeds of Swami Vivekananda. He emphasized on the youth’s mantle and expressed the ways that an individual can grasp the essence and conclude one’s life that comprises of high morale in the crux.

The Speaker of the day, Mr. Raghavendra Tripathi, alumni of the National School of Drama, a Motivational Speaker and Founder of “The Thespian Acting Engineering” mesmerized the audience by giving an account of the life of Swami Vivekananda through a narrative. He, in the voice of Vivekananda, annotated the ideals, dreams and desire for a nation that ensures equality for all and promoted the well being of the nation with the most powerful weapon, the youth. He also talked about the incidents that his mother experienced through a dream at the time of his birth and how his father, who left him soon, had a great influence in moulding him as a person and his life further. Swami Vivekananda was a firm believer of equality that he thought must be ensured among all the classes.

Telling about his life Mr. Raghavendra Tripathi spoke about Ramkrishna Paramhansa, the constant guide, mentor, and teacher of Swami Vivekananda who made him realize certain aesthetics of human life. It was after his motivation and guidance that Vivekananda went on along a path that was dedicated to the service of the human race and its upliftment and enlightenment.

The students came to know about various aspects of the life of Swami Vivekananda. They were informed that Swami Vivekananda was born on January 12, 1863, in the city of joy Calcutta. His original name was Narendranath Dutta. His father Vishwanath Dutta was a learned man who has profound knowledge of both English and Persian.

With the teachings of Ramkrishna Paramhansa, Naren later established the Ramakrishna Mission on 1st May 1897 which is also working at a present-day engaged in offering voluntary welfare work for the poor and the needy people. After becoming a monk Naren was named Swami Vivekananda. He visited America to participate in the Parliament of World Religions held in Chicago in 1893. In his lecture, Swami Vivekananda explained to the world that God is the one big sea, and all religions are like rivers ultimately merging in the sea. According to him, there should not be any dispute among the preachers of various religions that they worship God in separate forms or with different beliefs.

The event was also followed by some of the queries of the students that were answered by the guest. He also emphasized that how meditation and quest of a peaceful life is crucial in an individual’s life. He conveyed that even Vivekananda himself was an ardent admirer of peace and aesthetic living.

The Webinar concluded with a Vote of Thanks delivered by Dr. Reeta Rautela and an expectation of more such fruitful events in future.