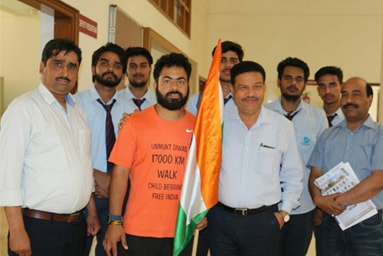 Uttaranchal University whole-heartedly welcomed Ashish Sharma and announced its full-fledged support towards his Project ‘Unmukt India’ on 27th April, 2018. ‘Unmukt India’, being held under the Duayen Foundation, is the title of the 17,000-kilometer long walk undertaken by Ashish as part of his campaign to end begging in India. The campaign aims to cover all 29 states, 7 Union Territories and 4900 villages to create awareness targeting the elimination of the social vice – child begging. One of the objectives of his journey is to meet students and visit schools and colleges. His solution to this social vice : “Let us take it upon ourselves to eradicate the problems which we are facing, instead of complaining about them. Children will surely be a rock solid support system if we raise them well today. Only then we can see a substantial growth both in them and future generations.” (https://thelogicalindian.com/my-social-responsibility/this-mechanical-engineer-walking-17000-kilometres-to-make-india-free-of-child-beggars/)

Ashish Sharma, a Mechanical Engineer quit his job and began his walk on August 22, 2017 from Udhampur in Jammu to start OneGoOneImpact Campaign that received immense support from all people in India. Elaborating on his project Ashish said, “The project, Unmukt India, is being taken up in phases by the Duayein Foundation. The foundation is run by me, in collaboration with Bhavini Mehta and Saba Hussain. We have developed an application on which we are mapping every nook and corner of India and integrating the police stations for every 5 km of area. Anyone who sees a beggar can click a picture and upload it on the application along with the location and we will send it to the police station concerned. It will then be the responsibility of the police and the administration to rehabilitate the beggar. We are not asking the public to rehabilitate the beggars, we are counting on the administration and police department to do so.” He further added that “If we can’t keep the people away from begging, we can at least make the public aware that we must not give alms. If they stop getting alms, they will stop begging,” (http://www.tribuneindia.com).

Uttaranchal University identifies with the belief that the responsibility of bringing the change which we want to perceive in the society should be initiated by us. We sincerely applaud the efforts taken up by Ashish and extend our support to Project ‘Unmukt India’.