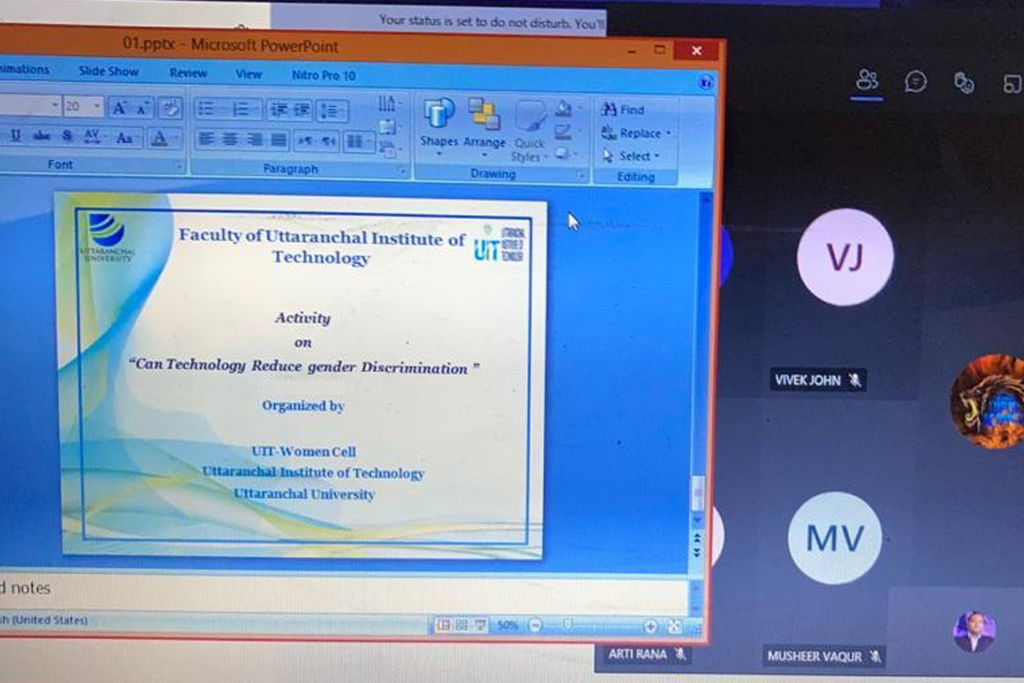 Women Cell –Uttaranchal Institute of Technology organized an online event on Gender Equity on 4th January 2021, on the Birth Anniversary of Savitribai Phule, who was instrumental in women’s liberation and education. “Go, get education” was Savitribai Phule’s appeal to women, in particular, and to people from the backward castes. She exhorted them to get education as a means to break free from the shackles of socially-constructed discriminatory practices.

The coordinator of the event was Ms. Arti Rana. The event was organized through MS-Team and the students of UIT participated in the event.

The event started by the opening remark of Ms. Madhu Kirola-Head, Women Cell-UIT. In her speech she stated that technology and the internet can be a great enabler for girls but lack of opportunities, skills and a fear of discrimination prevent many from using and creating digital tools and online content. She also discussed the issues of increasing cases of violence in India due to technology and ways to safeguard oneself. The students presented their views online regarding the importance of technology and how it can reduce gender discrimination. Ms. Sneha, student of B.Tech. Third Year, talked about Digital Literacy, Online Harassment and its repercussions, Skimming and Correct use of Social Networking Sites. She told being the part of developing country, where most of us are dependable on the internet, we should know what the technology is offering to our society. In this digital era, women should not be afraid of using technology instead they should come ahead and learn how to use it intelligently for the betterment of everyone.

The event concluded with a Vote of Thanks delivered by Ms. Madhu Kirola – Head, Women Cell, UIT).