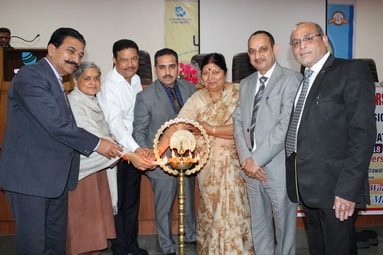 The Women Cell ‘Sashakti’ of Uttaranchal Institute of Management organized a Panel Discussion on “Gender Sensitization” on 10th March, 2018.

The event was graced by the presence of Hon’ble Chancellor Shri Jitender Joshi, Vice Chancellor Prof. (Dr.) N.K. Joshi, Director – Student Affairs and IT Services Dr. Abhishek Joshi and Director-Uttaranchal Institute of Management Prof.( Dr.) Pradeep Suri. Dr. SM Mariyam Fatima, Head of the Department – Management, Dr. Sonal Sharma, Head of the Department – IT along with all faculty members and students were present on the occasion.

The event was inaugurated by Hon’ble Chancellor Shri Jitender Joshi. He felicitated the Guest Speakers and congratulated UIM team for organizing a panel discussion on ‘Gender Sensitization’ which he described as the need of the hour.

The event commenced with the lighting of the auspicious lamp followed by the recital of the University’s Kulgeet.

Vice Chancellor, Prof. Dr. N K Joshi expressed his views on gender discrimination and suggested that the gender sensitization begins from home. He quoted Swami Vivekananda and affirmed that, spiritually speaking, the soul has no gender. Gender Sensitivity refers to completely unbiased behaviour everywhere. It means respect for a person irrespective of their gender. He stressed that not utilising the potential of fifty percent of population will adversely affect the economy and the productivity. Women are equal contributors in economic areas too. He informed that Visaka Guidelines by law aim prevention of sexual harassment at work place. He concluded by hoping that this discussion would increase awareness among all towards respecting women.

Prof.(Dr.) Pradeep Suri (Director-UIM) said that Gender Sensitisation was crucial to make the world a better place to live in. He stated that women are advancing in all areas and even heading big organisations successfully. He referred to ample examples of their stunning achievements in hitherto male dominated areas. Affirming that working women discharge double duties he said that time has come to gracefully acknowledge their vast contribution to the world. According to him, cases of female foeticide and workplace harassment are on an ever high and must be checked stringently. In the end of his address he stated that women know their rights and do fight for them, society has to change its mind set against women.

Ms. Sarojini Kainthura ( President, Rajya Mahila Aayog)
She emphasised that man and woman are two sides of the same coin and like two wheels of a cart. One wheel cannot move without the concurrence of another. Women are emotionally strong and always remain loyal to their parents and family. They add colours in the life of all. She further stated that society should respect women, there should be equality of opportunities for both genders and steps are required to eliminate dowry system.

Ms. Ramindri Mundrawal (Secretary, Rajya Mahila Aayog)
She explained that with the dawn of civilisation, the woman was allocated Home and Hearth and the men were made to go out and scout for food and other household items for the family. These stereotypes could not be broken till today, more or less all over the world. The bread-earner was raised to a higher pedestal rather than the home maker. Gradually, men started exploiting women and they were relegated to position of insignificance. The trend continues till date. Gender sensitisation denotes accepting everyone as human being irrespective of their gender. Accept the people as they are without any discrimination on gender basis. She further cautioned girls not to copy boys in vices, since vices will bring a massive downfall to their lives and they may never be able to recover the lost ground.

Mr. Mukul Sharma (Motivator and Clinical Psychologist)
He said that harassment of women does not happen abruptly. It is a gradual and time consuming process. Men cannot exploit the women unless women come too close to them and accept their advances. Men tend to abuse them after creating proximity to them. Have healthy friendship and keep distance from boys with ulterior motives. Sometimes, lack of affection from family leads girls astray. Families must keep close and affectionate ties with their wards especially girls since they need higher psychological reassurance from their elders. A deceived girl is prone to go into depression and may develop suicidal tendencies. So, they should never cross limits in relations with opposite sex.

Student : How can we make our system gender sensitive?
Panellist: From the beginning, stereo types of boys and girls need to be abolished and they
should be brought up at par.

Student : Is Gender Sensitization a part of curriculum anywhere?
Panellist: There is a move in the offing to include gender sensitisation in the curriculum.

Student : Should there be a boundary between boys and girls?
Panellist: Yes, there ought to be a respectable distance between the two.

Student : How can education bridge the gap in gender inequality?
Panellist: Education can make them respect each other and caution them against danger involved
therein.

The event was highly successful and ended with a Vote of Thanks proposed by Dr. Pradeep Suri.